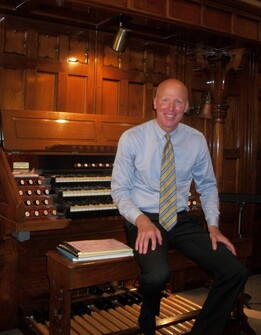 Kent Jager started his ministry at St. Paul in the spring of 2021. With a particular passion
for sacred choral music and organ literature Kent works with the other St. Paul musicians
to open the rich heritage of sacred music to our families and the community. On a typical
Sunday you will find him at the organ, working with the St. Paul Ringers, or singing
special music.
His church music experience began at the early age of 14 when he started playing for
weekly services at Faith Community Church in Eddyville, IA. From there he went on to
Central College in Pella, IA where he received a Bachelor degree in Organ Performance,
studying with Davis Folkerts, and sang with the A Capella Choir and Chamber Singers.
After Central he was the interim organist at First Presbyterian in Ottumwa, IA for a year
before heading to Evanston, IL to work on his Master’s Degree in Church Music. While
at Northwestern he studied organ with Grigg Fountain and choral conducting with Robert
Harris and was the Assistant Organist at First Presbyterian Church in Evanston. He
received his degree in the spring of 1983.
Following Northwestern he accepted the position of Assistant Organist at Holy Name
Cathedral. At Holy Name he worked with Richard Proulx, a leading church musician in
the United States at the time. His primary responsibilities included working with the
Cathedral Girls and Boys Choirs, the Women’s Schola, assisting with the Cathedral
Gallery Singers (a volunteer adult choir), and playing for the many Masses at the
Cathedral.
In 1999 Kent became the Assistant Organist at Queen of Angels Parish in Chicago and
was appoint Music Director in 2001. As Music Director he established a graded choir
program at the parish This included the Cherub Choir (grades K – 3), the Choristers
(grades 4 – 8), St. Cecilia Singers (high school and adult volunteers), and the Schola
Angelorum (the adult professional choir). In addition to the choral work he was principal
organist for the parish.
In 2021 Kent “retired” from Queen of Angels to spend more time in Iowa with his
family. The retirement was short as St. Paul needed at organist about that time and Kent
first played at St. Paul in May of 2021.
Kent is excited to be a part of the music ministry at St. Paul and looks to continue the
long tradition of fine choral and organ music which the church is known for. He hopes
everyone will have the opportunity to discover the beauty of sacred music and welcomes
anyone interested to contact him if they would like to be a part of the Music Ministry at
St. Paul.

Tim Foster began playing organ and singing at St. Paul in December, 2021. Tim grew up in Oskaloosa singing in various choirs at the Methodist church, in the GOVAP children’s chorus, OPUS honor choir, Oskaloosa High School choirs, and as a soloist he sang with the Oskaloosa Symphony Orchestra. He studied piano with Cynthia Zimmerman and Carolyn Tschetter, and sang under the guidance of Judy Bishop and Chris Weinreich. He and his siblings even occasionally sang at St. Paul in the summers.
Tim completed a music major at Creighton University in 2012 (voice primary concentration, organ secondary concentration), where he sang in the Chamber Choir under Dr. Barron Breland, studied voice with Diane Owens, and studied organ with Dr. Marie Rubis Bauer, Cathedral Organist at St. Cecilia in Omaha. He went on to complete a Master's and PhD in Spanish at Vanderbilt University, where he wrote his dissertation investigating the representation of music in the literature of 16th- and 17th-century Spain (now a book, Music and Power in Early Modern Spain: Harmonic Spheres of Influence, Routledge, 2022). While in Nashville he sang in the Chancel Choir at West End United Methodist Church and in the Portara Ensemble.  After a brief stint as college professor in Texas, in 2021 Tim returned home and now teaches Spanish at Oskaloosa High School.
​Tim is excited about the chance to practice sacred music in his hometown and to develop opportunities for fostering a love of language, culture, and music in the next generation of Oskaloosa youth.